Don’t forget to sign up for our newsletter!
Looking for book sales? Check out our list of deals here!!
Read an exclusive Excerpt of one our most anticipated reads – The Guy on the Left by Kate Stewart!
This book news! The Younger Man by Karina Halle! See the cover and blurb!
Marni Mann wow’s with the cover of her upcoming release! See it here!
See the cover of Devney Perry’s upcoming release, Riven Knight!
Favorite series alert. Check out an exclusive excerpt from Demise of a Self-Centered Playboy!
Read a giggle worthy excerpt from Trying to Score by Kendall Ryan!
The Royal Rogue by Karina Halle is LIVE. LOVED. THIS. BOOK!
Read the first Chapter of His Royal Highness! This is a TOP READ!
Jaw droppingly sexy cover from Julie Kriss. I can’t wait to get my hands on Sexy as Sin!
M. Robinson, The Queen of Angst, has a new release and we have an exclusive excerpt!
Guys, KEEPER by Amy Daws is LIVE on Amazon. This is a sports romance standalone that’s FREE on Kindle Unlimited right now. Meet Booker and his roomie Poppy in a friends to lovers romance that sounds so freaking good!!!
Title: Keeper
Series: Interconnected Standalone
Author: Amy Daws
Release Date: September 7, 2017
PURCHASE HERE:
AMAZON US | AMAZON UK | AMAZON CA 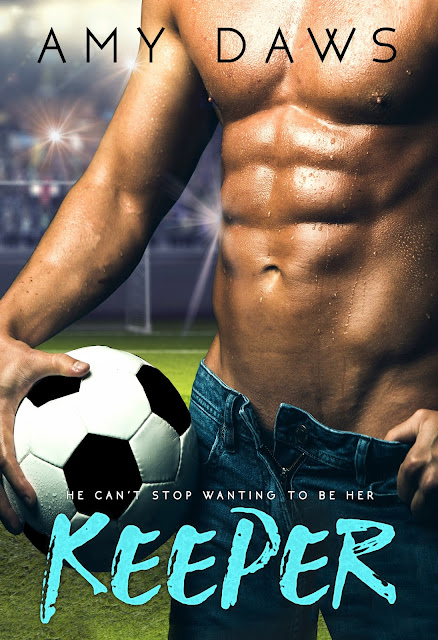 SYNOPSIS:
They were best friends until they became roommates.
Booker Harris has spent the last several years pushing himself to become the best goalkeeper in the Championship League. Tired of living in the shadows of his headline-splashing brothers, he has finally carved a path of his own.
As a child, Poppy McAdams was content in her own little make-believe world, until the boy next door with dimples and pained eyes came barreling into her makeshift fort demanding all her attention.
Best friends for most of their lives, everything changes when Poppy abruptly leaves London for University.
Now she is back, and gone is the awkward girl from Booker’s youth. She has been replaced by a stunning woman with secrets. Secrets that Booker is desperate to know.
Sharing a bedroom wall with your best friend from childhood quickly turns to anything but sweet and innocent.
PURCHASE HERE:
AMAZON US | AMAZON UK | AMAZON CA

My Dearest Booker Harris,
I’m emailing to inform you that I’m moving back to London in a couple of weeks. Germany has been lovely, but I miss my home country.
I thought you might like to know. 😉
-Poppy

Miss Surprising Poppy McAdams,
Wait…wait…What? You’re coming back? Where are you living? Why are you coming back? Did you get a new job? It’s been six years since I laid eyes on you, and you inform me you’re coming back via email? Call me sensitive, but is your mobile broken?
-Booker

Mr. Detail Manwhore,
You would have been able to lay eyes on me if you had that thing called Facebook. Or Instagram. Or Twitter. What kind of twenty-five-year-old bloke doesn’t have social media?
p.s. I would have called, but I’m more pithy via email and that annoys you, so just enjoy it. 😉
-Poppy

Miss Pithy,
Social media is annoying. And let’s face it, once you’ve seen one dick pic, you’ve seen them all.
-Booker

Mr. Dick Pic?
Funny, I would have thought as a famous footy player, you’d get more tit pics than dick pics. Maybe some dirty knickers…That sort of thing. My mind could go wild with possibilities.
-Poppy

Miss Active Imagination,
It’s those possibilities that keep me off social media for good. Plus, I enjoy being mysterious. 😉
So, where are you staying? New job?
-Booker

Mr. Persistent Detail Manwhore,
It pains me to say this, but I’m going to stay with the parental units for a couple of months. And you guessed it. I got a job teaching German to Year 7’s at a private school in Hoxton. I start in September.
However, the school also offered me a night class position teaching English as a foreign language in their learning annex in Shoreditch. Another teacher backed out last minute and the money is too good to pass up, so I’m coming home early. I’ll be a proper Chigwell commuter bee from May until my flat opens up in July.
-Poppy

Miss Commuter Bee,
You’re going to commute from Chigwell? You’ll have to take a train or bus and then transfer to the Tube. That’ll probably take at least an hour. You’ll have to get a car.
-Booker

Mr. Read Between the Lines,
Money is tight. That’s why I’m coming back early for the great-paying secondary job. Travelling the world and higher education is hard on a savings account. 😉
-Poppy

Miss Low Funds,
Taking the train or bus at night doesn’t sound very safe. Haven’t you heard any of those human trafficking horror stories? I recently attended a charity event about it, and I couldn’t sleep for weeks. You’ll stay with me.
-Booker

Mr. Confusing,
How would staying IN CHIGWELL at your dad’s be any better than my parents’? Have you forgotten we’re neighbours? I’ve been gone a while, but my memory is apparently far superior to yours.
-Poppy

Miss Destiny,
I’m moving, literally in two weeks. Vi found a flat for me in Shoreditch of all places. This couldn’t be more perfect and you know it.
-Booker

Mr. Newsworthy,
You’re finally moving out of your dad’s! Go you! Congratulations! Maybe now you’ll have a bit of a life outside of football.
-Poppy

Miss Flatmate,
Don’t avoid the offer. You’re staying with me and that’s all there is to it.
-Booker

Mr. Bossy Booker,
I know we’ve known each other forever, but two months is a long time to stay with someone you haven’t seen in SIX YEARS!
-Poppy

Miss FLATMATE,
You’re still my best friend. You may have buggered off to Germany for far too long, but nothing changes that fact. You staying with me until your flat opens up is destiny’s way of giving us an opportunity to rekindle our friendship. Also, rent will be highly competitive. I accept payment in the form of hugs.
-Booker

Mr. Cheesy,
Who are you and what have you done with my best mate, Booker Harris? I thought you only hugged me when I cried. Where’s the brooding little boy who used sticks to pick the dirt out from under his fingernails?
-Poppy

Miss Denial,
You’ll be pleased to know that my personal hygiene has improved immensely since primary school, which should make paying rent more enjoyable. Plus, I’ll say whatever is necessary to keep you from commuting night after night. Poppy. I’m not kidding. This is East London. You’re staying with me and I don’t want to hear any more argument.
-Booker

Mr. Practical,
I hope you know what you’re offering. You do remember what I’m like, right?
-Poppy

Miss Poppy,
I fully expect to hear you singing in the shower.
-Booker a.k.a. Your Future Flatmate, even though you won’t admit it yet.


LOVED that sneak peek of Keeper? You can grab your copy now!
The entire series of standalones featuring the Harris brothers is FREE to read with Amazon’s Kindle Unlimited!

Amy Daws is a lover of all things British and her London-based love stories bring the incredible city to life on every page. Read all about hot British men, hilarious heroines, and unforgettable and original ensemble casts that pull out all the feels. For more of Amy’s work, visit www.amydawsauthor.com .
WEBSITE | FACEBOOK | TWITTER | INSTAGRAM
PINTEREST | GOODREADS | AMAZON PAGE